But we usually find the opposite case in Scripture. Most of the time, in the Old and New Testament, we meet people or groups of people who worship a pantheon of gods. It seems a great portion of Paul’s ministry to the Gentiles involves him talking about the one true God opposed to the many deities that a group of people worshipped (Acts 17:23).

So, does Scripture remain silent when it comes to atheism? Do we have any examples of how to dialogue well with someone who may not be open to hearing the word of God and who does not believe in God?

We’ll address these questions and more in this article.

The term seems simple enough at its roots. A- comes from the Greek form of “without” and theism (from theos) means God. A belief without God.

But as Christians we often, haphazardly, lump all atheists in a group together. In the same way that people will put Mormonism, Jehovah’s Witnesses, and Christianity in the same grouping (we don’t have much time, or article space, to discuss why these are not the same, but for some good articles on this I suggest reading this and this article).

Atheism, in some ways, is a religion, and like most religions, has several different branches, deviations, or denominations.

Although we can’t dive into every variant of atheism, we will highlight a few below.

First, we have those on the border of atheism known as agnostics. These people don’t really know if God does or doesn’t exist. Some are more open to the idea than others.

Then we have gnostic atheists who, beyond a certainty of a doubt, believe no god(s) exist.

Most people who fall into these camps have adopted a type of casual atheism. They may not give much thought to theological matters. Some have analyzed philosophical arguments to form their worldview. Others believe in a religion that doesn’t require a deity, such as Buddhism.

We also have some branches of dogmatic atheism. Yes, even atheists have evangelical branches.

Then we have the evangelical atheists, who try to evangelize their message of atheism and convince others to convert to their beliefs. I had a history teacher who, before he converted to Christianity, would call himself the “Christian killer.” He would ardently try to argue people out of their religion and into atheism.

So, when we encounter an atheist friend, we need to figure out which “denomination” they belong to before beginning a conversation with them about theological matters. 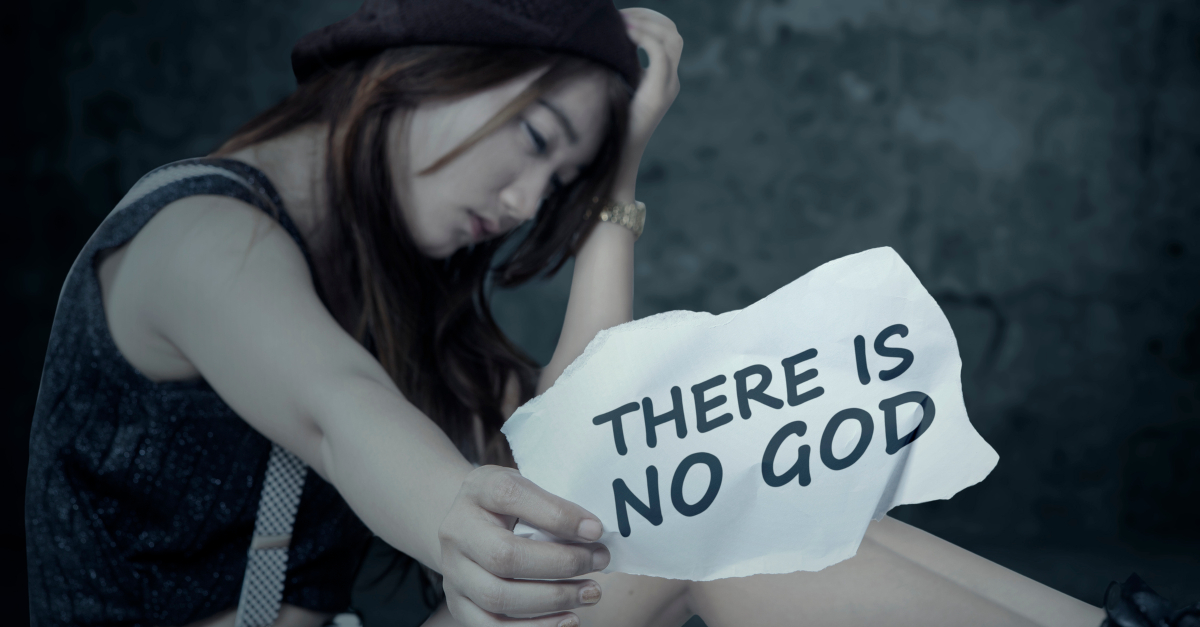 Does the Bible Address Atheism?

The Bible may not contain many stories about people who have no belief in God, since many people believed in a higher power during the Old and New Testament times, but we do have some verses that discuss atheism.

For instance, Psalm 14:1 says, “The fools say in their heart, ‘There is no God.’” That means sometimes during the reign of David individuals did exist who didn’t believe in a deity.

We have evidence from Plato that atheism was alive and well in the fourth century BC when the Greeks had plenty of gods to choose from to worship.

We also see a warning about how to approach philosophic dogma, a hallmark of atheism, in Colossians 2:8.

Atheism didn’t just spontaneously come into being during the Enlightenment. Whether someone was a nominal polytheist who worshipped the gods as part of their culture or, as a more contemporary example, when someone attends church because it's something their family always did despite not believing in God, atheism has persisted throughout the centuries.

We also have to bear in mind the Bible doesn’t say, “When you walk up to a Buddhist, here’s what you should say to them,” or “Use these arguments when you meet an atheist.”

That defeats the purpose of Scripture. Scripture sheds light on the good news of Christ and encourages us to speak the truth in gentleness and respect (1 Peter 3:15).

What the Bible does address is people who have lost their way from the narrow path (such as Saul/Paul, for instance) and how God redeems them. God doesn’t need us to fight his battles for him, but he does need us to know our Scripture and be prepared to speak about it.

How Do I Talk with an Atheist about God?

Again, one section of one article does not nearly cover the breadth of this topic. I first suggest you feel out which denomination your friend ascribes to. This will determine your actions going forward. Do they have a more open/agnostic view of God, or do they swing to the other extreme where they want to see churches burn?

Trust God can open the eyes and the hearts of any man.

Continue to pray for your friend and keep the dialogue as open as possible. Show you respect their views and listen as much as you speak.

Also, prepare yourself for some of the most common arguments against Christianity. Many atheists will have these at the ready. And many atheists believe that Christians don’t really know their stuff when it comes to apologetic matters. So don’t go into the conversation ready to convert if you don’t know the basic foundation for the faith that you have.

And know that sometimes God uses us to plant a seed. Maybe you are not the one to convince them about the case of Christianity, but you may open their mind to the possibilities of the existence of a good and powerful God.

Whenever you go to speak with an atheist, pray that God seasons your words with salt and that you carry yourself with the utmost gentleness and respect.

Hope Bolinger is a literary agent at C.Y.L.E. and a graduate of Taylor University's professional writing program. More than 600 of her works have been featured in various publications ranging from Writer's Digest to Keys for Kids. She has worked for various publishing companies, magazines, newspapers, and literary agencies and has edited the work of authors such as Jerry B. Jenkins and Michelle Medlock Adams. Her column "Hope's Hacks," tips and tricks to avoid writer's block, reaches 6,000+ readers weekly and is featured monthly on Cyle Young's blog. Her modern-day Daniel, Blaze, (Illuminate YA) Den (releasing July 2020), Dear Hero (releasing September 2020), and Dear Henchman (releasing 2021)  Find out more about her at her website.

This content first appeared on Crosswalk.com and is used here with permission. To view the original visit: https://www.crosswalk.com/faith/bible-study/does-the-bible-address-atheism.html

He created us for fellowship. He desires praise and prayer. He's absolutely listening.