There are a few moments that stand out as optimal grandparent time in our memories. You know, the ones many of us share if we were blessed enough to be able to spend time with our grandparents.

The Christmas program, when, as a child, you looked out into the audience and saw their proud smiles. Or, the birthday when they bring you the present you were aching for and had been told by the not-so-cool parents that you wouldn’t be receiving it. Or, there may be that one special memory that you revisit from time to time, and a reminiscent smile rests on your face.

But what is the difference between memory versus legacy.

Webster’s dictionary defines “memory” as: the power or process of reproducing or recalling what has been learned and retained especially through associative mechanisms. Essentially, it’s a repetitive replay of the past, either good or bad, special or traumatic.

“Legacy” on the other hand, comes with a very different emphasis. Webster’s describes legacy as: something transmitted by or received from an ancestor or predecessor or from the past. A carrying over of something tangible, perhaps tradition, a belief, a way of life.

In this article, we will focus on how grandparents can truly leave a legacy of faith that can shape their families for years to come.

How My Own Grandparents Impacted My Faith

While, my memories of my grandma are those of watching the Lawrence Welk show on her slippery couch (some material that was actually shiny!), and of being put to bed only to sneak out after my older brother was asleep to curl up into her cozy side and watch Dallas and Dynasty (perfect childhood bedtime shows), I have taken some time recently to sit back and reflect on what legacy she left behind.

How was it different from my other grandmother’s? And how my grandfathers’ legacies affected me as well?

I knew my Gramma Wright for my first eight years of life. Memories are sketchy, but legacy? I have been startled at how much legacy was instilled in me in those short eight years.

The one I recall the most, is the legacy of joy. She was an insatiably joyful person. I’m not sure if that was just my perspective, but then, does it matter? It was what she passed along to me.

She showed me joy by taking a deep satisfaction in allowing me to spend time with her. Whether it was watching a forbidden nighttime soap that went completely over my head, or helping her make her ridiculously salty homemade macaroni and cheese, or telling me stories of sleigh rides in the snow at Christmas as a child.

Gramma Wright found joy in every circumstance. I’m sure her faith played a part in that. She’d lost my Grandpa Wright before I was born, but she didn’t exude a spirit of loneliness or grief. I’m sure she felt it, but her mission seemed to be to instill in me a legacy of joy.

No matter the circumstance. When she passed away, the last time I visited her in the hospital, I recall her shouting down the hallway from her bed as I walked away with my parents to go home. “I love you! I love you!” she cried in a wobbly, weak voice.

Looking back, I get teary eyed. It’s a memory to go along with her legacy. Her legacy of time spent with loved ones, and finding essential joy within the spirits of her family. As you study your relationship with your grandchildren, consider the qualities and characteristics you want to etch into their foundations as pivotal.

These will stay with them long into their adult years as cornerstones to who they are as a person and as someone impacting the world around them.

My other gramma, Gramma Lola, instilled in me a legacy of history. She breathed and oozed family history and every antique she owned was connected to someone in our lineage who had a story.

Gramma Lola was not a story writer, nor was she a story teller, but yet she believed strongly in the power of story. In the power of remembering loved ones, learning from loved ones long since past, and incorporating their legacies in our daily lives.

I knew from a young age that her father had struggled with prejudice as a German immigrant who spoke little English. I learned too, that he fought through it, took pride in his heritage, and made sure his children and grandchildren held their heads up.

My Gramma Lola was not ashamed of her strong German roots, even when the World War came and Germans weren’t particularly preferred. Do your grandchildren know where they came from?

Scripture talks of the influence of ancestry and generational traditions and faith. If your grandchildren aren’t aware of the framework that has formed your family, their attachment and devotion to what has been important in your family tree, will be lost.

Educate them on the constructs of their ancestors, and share with them the faith, the perseverance, and the fortitude with which your family tree has been cultivated.

I can go on. But now that I have my own children, I look to my parents and my in-laws and how they too are instilling legacy. Most importantly, how they are instilling a legacy of faith.

It’s more than apparent that grandparents have a huge impact on the lives of their grandchildren. And, while I’ve sought out these legacies, defined them, and nested them deep in my heart, how does a grandparent effectively communicate legacy to their grandchildren? Especially a legacy of faith?

In reviewing my own experiences, and now watching my children’s, I’ve found some clarity. Here are 3 ways grandparents can leave a legacy of faith. 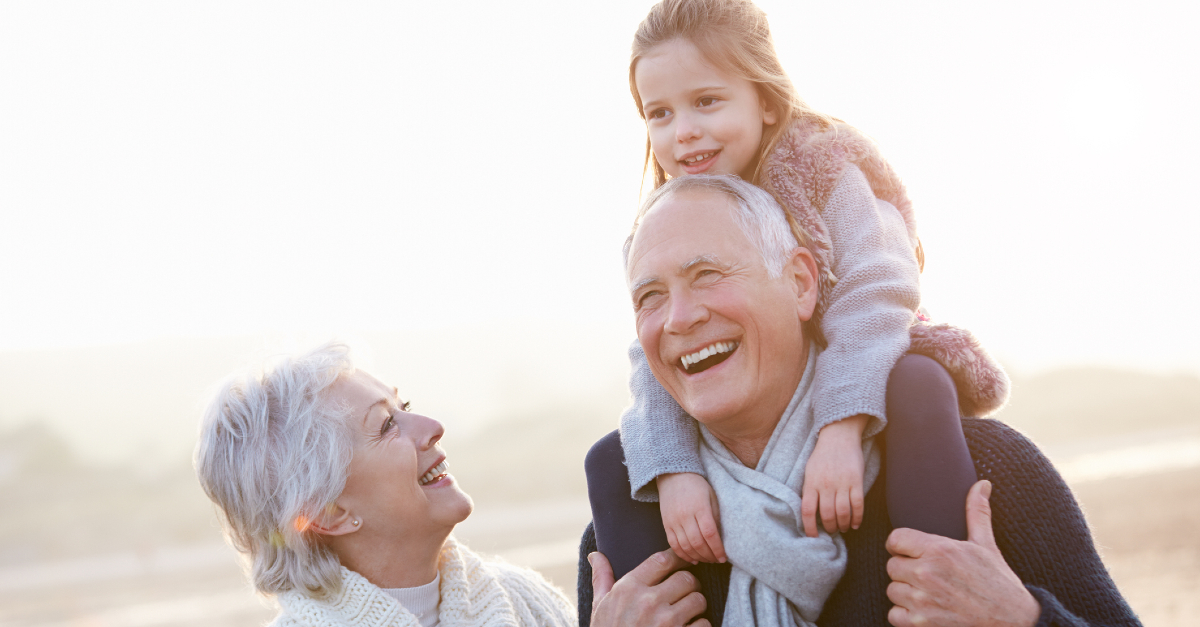 My grandparents were strong in their faith, and because of such, that legacy was passed on to both sets of my parents. But it wasn’t the going to church part that instilled it.

Honestly, it wasn’t even the practice of Christianity’s traditions. It was how they lived their faith.

When there is a struggle with one of my children at school, my mom will pick them up and more often than not, by the time I’m able to snatch them after work, my Dad has spent time in prayer with them over the situation, or my mom has commiserated with my daughter and then helped her to self-reflect on what Jesus would have her do.

A legacy of faith is the inclusion of bedtime prayers with grandparents, and when my Dad plays “church” with them, allowing the kids to “preach the Word”, and lead worship songs with their ukuleles and recorders.

I’m sure it's the most unprofessionally produced worship service, but the kids come home chattering about how they had “church” with Poppy--on a weekday.

Faith becomes just a normal part of life. It’s not marked by significant traditions, so much as stamped into life by daily events.

2. Make Faith a Part of Every Day Conversation

I think grandparents often rely on the fact that actions speak louder than words. In the end, the old adage is true.

However, with children--especially little ones--it’s important to verbalize your faith.

Do I recall my grandparents living a good life? One of ethics and morality? Absolutely! But I also know--because they made it clear by talking about it--that these decisions were not made simply out of innate human goodness.

It was driven by their faith in their Savior and was dependent on not just their awareness of Him, but also their reliance on His Word. Our children need to learn--especially in these days--that goodness, kindness, faithfulness, gentleness, self-control, and so forth, are not inspired by our personal aptitude.

Different versions of human kindness and respect abound and what to some is common sense, to others, it contradicts the essence of what they’ve experienced. A measuring tool, a point of reference, a place of truth, needs to be established for these little lives who will one day take up the mantle of faith and walk forward.

So speak your origins of faith into them. Verbalize the Scripture you hold dear. Express to them why you do what you do as inspired by your relationship with the Lord. Don’t rely merely on your actions to communicate the roots and the foundations of why those actions abound.

Words become the memories we draw upon long after loved ones have left our lives, and the verbalization of your faith will become a whisper on their heart for eternity.

I know my Grandpa Wright found hunting and fishing to be his number one thing. It was his hobby, his passion, and by having such, he instilled a deep appreciation for nature into my dad and his brothers, which in turn, has been passed down to us.

Interestingly, what is missing here, is his faith. I asked my dad once if Grandpa Wright had been a follower of Christ. My dad replied that he believed he was. That he had been baptized and had made a profession of faith at a Billy Sunday revival meeting.

But the thing is, the prioritizing of that faith was not my grandpa’s priority. Did that make him a bad legacy builder? Not at all. In looking back on his life, I believe he was a follower of Christ--again, his actions speak as well, but his voice was very quiet.

My own dad has made a pivotal effort in his relationship with his grandchildren, to make it known that he is passionately following Jesus. It is his priority.

There will be no question, after my dad passes, as to whether he was or wasn’t a Believer. It will just be known. It was his priority, after all, and he made sure we all knew that. Very, very well.

The prioritization of your faith will become a spiritual tattoo of sorts on the souls of your grandchildren. While it can--and at times will--be ignored, it is still always there and it is non-erasable.

It is in the dark times, perhaps even the blessed times, your grandchildren will capture glimpses of these Spiritual priorities, inked in a Spiritual pen, that will draw them, compel them, and remind them that faith is an indelible mark of consistency they should not ignore.

In the end, leaving a legacy for our grandchildren is important. Leaving the legacy of faith is critical. Faith is being challenged, threatened even, and going forward, freedoms may even be limited.

We cannot take for granted that faith will just come to our grandchildren, or they will somehow assume the faith because we have it. We must teach it. With words, actions, prioritization, and depth.

As Deuteronomy states so clearly, we must saturate the lives of the next generation with the Lord.

And your legacy will bear fruit for generations to come.

Jaime Jo Wright is the winner of the Christy, Carol, Daphne du Maurier, and INSPY Awards. She's also the Publishers Weekly and ECPA bestselling author of three novellas. Jaime works as a human resources director in Wisconsin, where she lives with her husband and two children.

This content first appeared on Crosswalk.com and is used here with permission. To view the original visit: https://www.crosswalk.com/family/parenting/grandparenting/ways-grandparents-can-leave-a-legacy-of-faith.html